“Every Move You Make”: Drone Surveillance as a Catalyst for Privacy Concerns

The commercialization of flight has diluted the shock and awe sensation that came with those first revolutionary flight-yielding days of Orville and Wilbur Wright. The compulsive finger-to-the-sky-“look!” reaction, once as pervasive as a yawn on the morning train, is a relic of the past. However, the heavenly population has gained a quieter, smaller, and cheaper set of wings that invokes similarly irresistible attention, albeit for different reasons: the drone.

While the majority of modern Americans are undoubtedly familiar with the word “drone,” the unmanned aerial vehicle at the forefront of many minds is the one used for military warfare somewhere far away from here. But in recent years, following Congress’ enactment of the FAA Modernization and Reform Act of 2012, a surge in drone use on the domestic front calls for a shift in focus. As reinforced by the resonating sound of shotgun bullets fired by one Kentucky landowner just last August, domestic drones invoke serious privacy concerns for many. For example, many drone models have the ability to loiter or hover overhead for long stretches of time for purposes of engaging in persistent surveillance. And because the age of innovation is speedily making drones cheaper and more effective, their wide-spread use is inevitably not far off. Taken to the logical conclusion, continual aerial surveillance will become the norm. 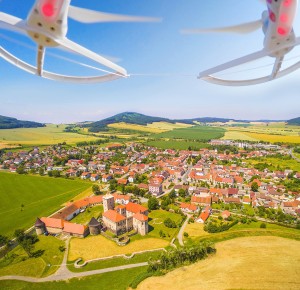 The Supreme Court has held that individuals do not generally have a Fourth Amendment right to privacy with respect to aerial surveillance because of the ability that anyone might have to observe what can be viewed from the air. Thus, where the government’s use of surveillance drones is challenged, the issue may turn on the specific location of the subject being surveilled (e.g., peering through windows inside an individual’s home is seen as something entirely different from observing activities in that individual’s backyard). For example, in California v. Ciraolo, a police-helicopter surveillance flight over a property owner’s fenced-in backyard revealed that the owner was growing marijuana plants. But because the owner’s activities were visible to any member of the flying public, the Court held that he did not have a reasonable expectation of privacy under the Fourth Amendment.

Some argue that Ciaraolo is not readily applicable to the use of drones because drones are stealth, often unobservable, and more technologically advanced in their surveilling capabilities. For instance, many drones can take pictures or even record conversations—techniques that previously required physical trespass—whereas a helicopter is not equipped to do the same. Those who agree with that distinction may be pleased to know that many state legislatures have taken the lead in enacting certain drone restrictions. In fact, a vast majority of states that have introduced drone related proposals now require a probable cause warrant in order for law enforcement to use drones to collect information to be used against someone in court.

In Illinois, the Freedom of Drone Surveillance Act prohibits the use of drones by law enforcement unless they have a warrant, have a reasonable suspicion that harm to human life is imminent, or they are searching for a missing person. In addition, police drone use is permissible for taking photos at the scene of a crime or traffic crash, to counter a high risk of a terrorist attack, and during times of disaster or public health emergencies.

But what about the private operation of drones on domestic soil? Commercial drone operations are technically banned in U.S. airspace per the FAA Modernization and Reform Act, but that stands to change as early as next year. (The FAA missed its September 2015 deadline for integrating unmanned aerial systems into U.S. commercial airspace, and is now looking to 2016). Commercial drones could be valuable to a variety of industries: paparazzi could use them to photograph celebrities, real estate firms could use them to take aerial photographs of its properties, and farmers might use drones for crop-dusting.

The legal claims arising from commercial and private drone use might fall outside the Fourth Amendment context, but some argue that there are valid concerns rooted in nuisance or trespass law. From the aforementioned shotgun-wielding Kentuckian’s point of view, a drone hovering over his property is analogous to physical trespassing.

The FAA suggests that state privacy regulations may be the best defense against privacy drone regulations, and at least one state does treat the drone-privacy issue as a question of trespass. But this approach may do little to curb privacy concerns because sense-enhancement technology creates space for privacy violations to occur even where a drone does not technically trespass into private airspace. Thus, moving forward, and particularly with the expansion of commercial drone operations under the new FAA provisions, states will face a formidable task in defining the legal parameters of these unique privacy concerns, weighed against the rights of people to fly their drones responsibly without governmental interference.

Survival of Remedies After Corporate Dissolution in Illinois – How Long...