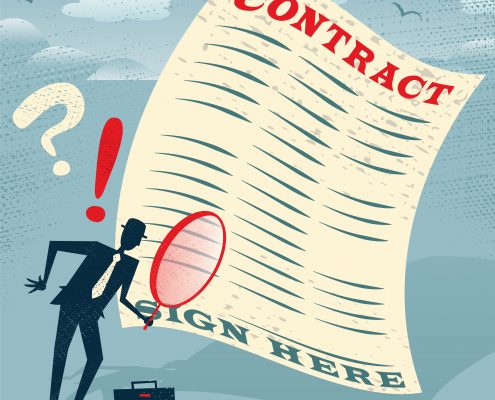 Overview of Liquidated Damages and Penalties

Liquidated damages are a risk and cost management tool that parties use to avoid the hassle of proving damages when a party has breached a contract. People often believe that their only option is to sue if someone breaches a contract, which isn’t true. One of the main reasons people file lawsuits is to have a court to determine the legal amount of damages they are owed. However, if you’ve already contractually agreed to the amount of damages, then typically you are legally bound to that amount of damages. Even if you can’t completely avoid litigation, for instance if the other party denies the breach, a liquidated damages provision can still substantially reduce litigation costs because you won’t have to prove damages, which is time intensive and expensive.

However, if your liquidated damages provision is actually a penalty, then courts are not required to enforce it. This is extremely problematic because it puts parties in the exact position they intended to avoid, which is having to deal with the hassles of proving damages and, now, that decision is in the hands of a judge or jury and there is no guarantee that they will award you the full amount of your damages. The distinction between liquidated damages and penalties can seem nuanced at first, but look at it this way: liquidated damages compensate a non-breaching party for actual losses and damages, whereas penalties are designed to financially punish the breaching party for punishment’s sake. Courts will absolutely allow you to seek damages and losses that you suffer when a party does not uphold their end of a contract, but, absent fraud or ill-will, they will not allow a contract provision that has no intention other than financially punishing a party that, in good faith, could not uphold its end of the bargain.

Now, if you’re like me, you are probably pondering whether courts should have the authority to intermeddle in private parties’ contracts in this manner. Rest assured, it’s a good thing for the vast majority of people and businesses. If penalties were enforceable in contracts, then the most powerful players in any given market could seriously abuse the less powerful players (often start-ups, smaller companies, and local businesses) because the only options would be to agree to do business with the large player and risk exorbitant penalties, or close shop. This would significantly inhibit the creation of new businesses and undermine a competitive market. Generally, the business world is better without contractual penalties, and in the rare instances when punishing a party to a contract is appropriate, such as in the instance of fraud, there are laws that allow courts and parties to impose penalties.

How Courts Distinguish Between Liquidated Damages and Penalties

When assessing whether a contract provision provides for liquidated damages or whether it imposes a penalty, the overarching determination the court will make is whether the amount set forth in the contract, at the time of contracting, was an attempt to fairly represent the actual damages a party would suffer from a breach of the contract.

In making this determination, courts look at: (1) whether the parties intended to provide for liquidated damages or for a penalty; (2) whether the damages are of a type that are difficult or impossible to estimate accurately at the time the parties entered into the contract; and (3) whether the amount is a reasonable forecast of the harm caused by the breach. Below is an abridged level of insight into each of the factors.

First, the contract shouldn’t refer to any amounts that are to be paid in the event of a breach as a forfeiture or a penalty. On its face, that shows intent to impose a penalty.

Third, the amount of damages should be reasonable and explainable based on the information available at the time of contracting, and should not appear to be pulled out of thin air. Frankly, if you’re unable to forecast damages with any degree of reasonable certainty, then you may not want to use liquidated damages as it could backfire.

Finally, keep in mind that under the “voluntary payment doctrine” any money paid voluntarily, with knowledge of all the relevant facts and without fraud or duress, cannot be recovered based on ignorance of law, or a mistake of how the law applies. Meaning, it doesn’t matter if the liquated damages provision would have been deemed an unenforceable penalty. If a party wants to challenge a liquidated damages provision in a contract, they must refuse to pay completely, or make payment under written protest.

Both Sides of the Coin: Cryptocurrency and Estate Planning